Skip to main content
It looks like you're using Internet Explorer 11 or older. This website works best with modern browsers such as the latest versions of Chrome, Firefox, Safari, and Edge. If you continue with this browser, you may see unexpected results.

This pathfinder aims to assist researchers in locating materials on the legislative process in California. Researchers will learn how to find and track proposed legislation and how to engage in effective advocacy.

Learning About the California Legislature

Learning About the Legislative Process in California

Pursuant to the California Constitution, both houses of the California Legislature convene on the first Monday in December after the November general election to organize, elect officers and adopt rules for the upcoming two-year session. Known as the biennial session, the two-year session is organized based on a legislative calendar. In the first year of the two-year session (e.g., 2009) both houses meet from January until mid-September and then recess until January of the even-numbered year. In the second year (e.g., 2010) the Legislature meets from the first week in January until it finally adjourns on November 30 of the even-numbered year.

All laws in California are enacted by the passage of bills. Bills may seek to make new laws, to amend existing laws, or to repeal existing laws. Although the process through which a bill becomes a law can be complicated, there are four basic stages all bills must pass in order to become law:

To introduce a bill, a legislator instructs the Office of Legislative Counsel to draft the measure and to assign it a request number. The bill draft is then put “across the Desk,” or delivered to the Assembly or Senate Chamber, where it is given a bill number by the Chief Clerk. The Clerk then sends the bill to be printed. Bills are introduced and read for the first time in their house of origin and typically must be in print for 30 days before any action or votes can be taken on them.

Once the 30-day waiting period has passed, the Rules Committee of the bill's house of origin refers the bill to a policy committee for a hearing. Some bills, whose subject areas are considered sensitive or exceed the jurisdiction of one policy committee, are "double referred" to two policy committees. In addition, bills that will have a fiscal impact must be heard by the house of origin's fiscal committee before a floor vote is taken on the bill. At the committee stage, bills are presented and legislators hear testimony in support of or opposition to the bills in an open hearing. Committees prepare written analyses of each bill, in which the effect of the proposed legislation is described and supporting and opposing viewpoints of individuals and organizations are noted. Following the conclusion of the open hearing, committee members vote by roll call on the bill. Committees may act on legislation in numerous ways: they may, for instance, pass a bill with amendments, pass a bill unchanged, hold a bill, “kill” or defeat a bill, or refer a bill to another committee. Once a committee reports a bill out of committee, the bill must be placed on second reading for the adoption, or ratification, of the committee’s recommendation.

Bills reported out of committee are read a second time on the floor in the house of origin and then are assigned to a third reading. After the third reading of the bill in the house of origin, another roll call vote is taken. If the bill passes, it is referred to the other house and the foregoing procedure begins anew. If the bill is voted upon and passes through the second house without amendments or with concurred amendments, it is ordered to enrollment and sent to the Governor for approval. If the house of origin does not concur with the amendments made by the opposite house, the bill is sent to a joint Assembly/Senate conference committee consisting of three Assembly Members and three Senators until concurrence is reached.

4. Enrollment and Consideration by the Governor

Enrollment is a process whereby the final version of a bill is printed and proofread to ensure that the language in the document reflects the final action by the Legislature. The process culminates in the actual delivery of the bill to the Governor’s office. The Governor has 12 days to consider legislation. Any bill that is not vetoed or returned by the Governor after 12 days becomes a statute without the Governor’s signature. The exception to this provision occurs at the end of each year of the legislative session, when the Governor is allowed 30 days to consider bills passed by the adjournment deadline of the Legislature. Bills signed by the Governor typically become law the next January 1 following the year in which the bill was passed.

The Governor may veto a bill by returning it to the house of origin without signature. A letter explaining the Governor’s objections to the bill is printed in the Journal and File of the house from which the legislation originated. Vetoed bills may become law without the Governor's signature if two-thirds of the membership of both houses vote to enact the vetoed bill.

There is a wealth of information available on the California legislative process, both online and in print. Several helpful resources that address the legislative process in California in detail are described below. The California State Assembly's visual depiction of the life cycle of a bill is provided below as well (readers may click on the illustration to view a larger version in a new window).

The Life Cycle of Legislation 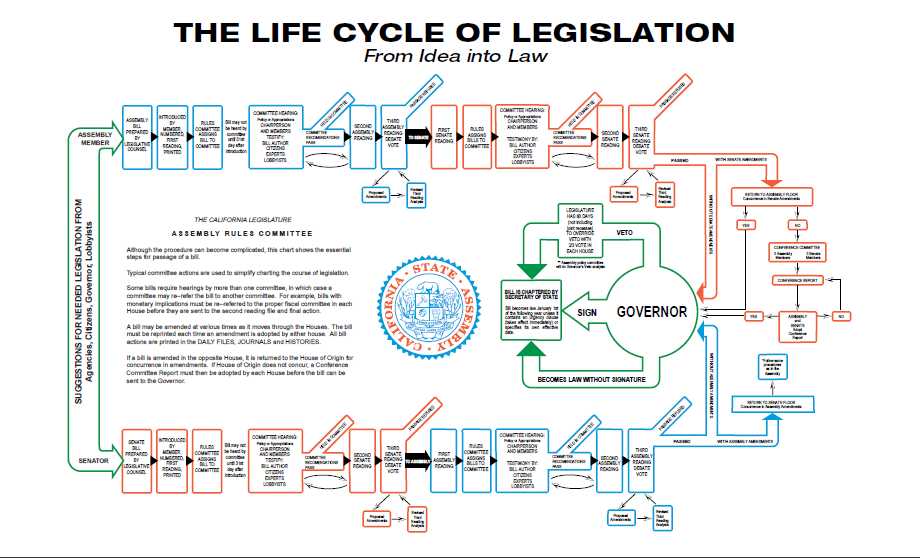 © 2020 The Regents of the University of California. UCLA School of Law. All Rights Reserved.